Thanksgiving was originally a holiday to give thanks to God for the harvest. Today it is an opportunity (in the USA and not only…) to give thanks for all the good things in our lives and to celebrate family.

Each year Americans are celebrating Thanksgiving on the fourth Thursday of November. The day is a national federal holiday in the United States. Many people travel all over the country for large family gatherings on this day. The way most families in the USA celebrate this day is by getting together and having a large meal: turkey, cranberry sauce, potatoes, sweet potato casserole, stuffing, vegetables, and pumpkin pie.

Most of the families in the USA are following the traditions, but many of them have their own funny, strange and even crazy ways of celebrating Thanksgiving!

The president of the United States does the annual pardoning of a turkey that will not end up on the platter. In 1963, President John F. Kennedy officially pardoned a turkey before the Thanksgiving dinner at the White House. Since then, every year, in a televised ceremony, the President is presented with a live domestic turkey that gets to live out its life on a farm.

These popular events generally held before Thanksgiving involve getting dressed up as a turkey and doing a 3-to-5-mile run, normally for charity. A great way to shed some excess calories pre-feasting, think of it like a Thanksgiving-themed mini marathon.

Many cities have large parades for families and especially for kids on Thanksgiving Day. Perhaps the largest and most famous parade is the Macy’s Thanksgiving Day balloons procession in New York City. It is widely televised and has been running since 1924. Other cities with big parades on this day include Detroit, Philadelphia, and Chicago. Felix the Cat was the first character balloon flown during the Macy’s parade in 1927. This year, the giant balloons characters like Pikachu, Power Rangers, Ronald McDonald, Paw Patrol’s Chase, Olaf from Frozen, Spongebob...

Some try on Thanksgiving day another kind of bowling : using a frozen turkey and soda or water bottles as makeshift pins. This hilarious tradition started in 1988 in a grocery shop, where the bowling took place in the alleys of the store.

WHAT ABOUT THE OTHER COUNTRIES?

Families celebrating THANKSGIVING around the world 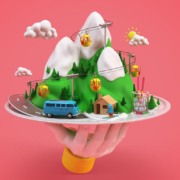